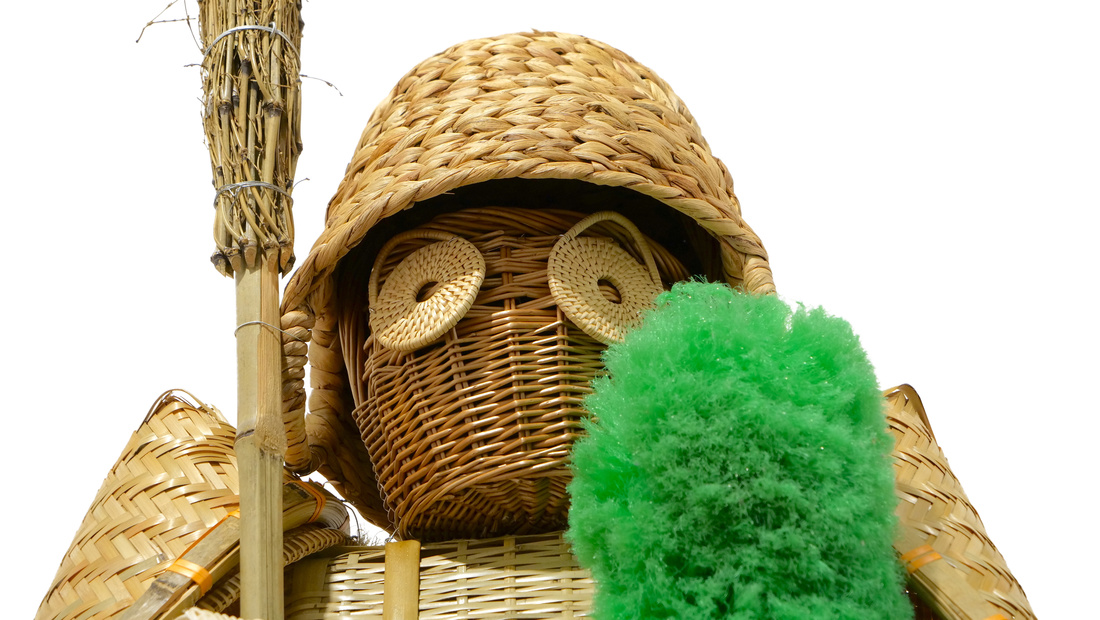 Currently, a special exhibition about the plagues of the Edo period is being held at the art center 3331 Arts Chiyoda. How did people in the old days, who knew nothing about bacteria and viruses, perceive diseases, and how did they deal with them? The exhibition has lots of highlights, such as mysterious yokai goblins, cute goods, and creative measures to control diseases!

Mr. Naoyuki Kinoshita (Director of Shizuoka Prefectural Museum of Art) and Mr. Masaya Takiguchi (Specially Appointed Associate Professor of Rikkyo University) supervised the ongoing special exhibition with the genius title “Ekibyo Taisan!” (which roughly translates to “Bye-bye epidemic!”). The staff told us to relax and enjoy the exhibition without worrying too much about the history and other difficult things and rather have fun with it. So we went with Bruce Lee: “Don’t think, feel”. 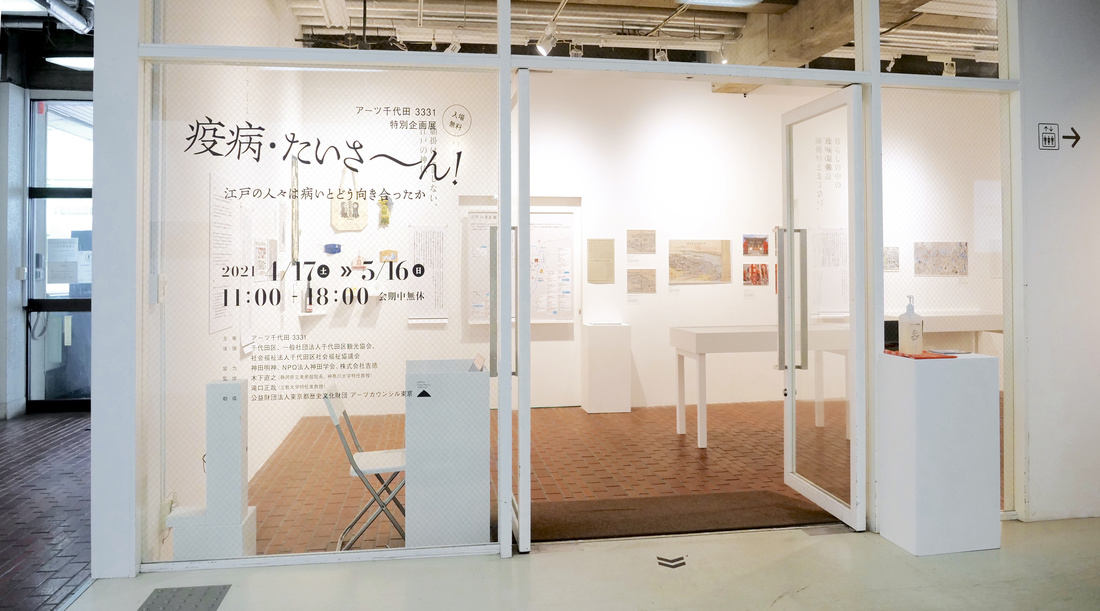 Do you know ‘Amabie‘?

In 2020, the novel coronavirus pandemic changed our daily lives. Here in Japan, many people installed the COVID-19 tracing app ‘COCOA’ developed by Japan’s Ministry of Health, Labour and Welfare on their smartphones. When you open the app, the first thing you see is an illustration of a yokai – a type of spirit in Japanese folklore. In this case, it’s a yokai called ‘Amabie’ that first came up in the Edo Period (1603–1868).

A long, long time ago, in the sea in Kumamoto Prefecture a yokai suddenly appeared. It said: “Be aware! An epidemic is about to start! (To prevent the disease) You have to draw pictures of me and share them with others!” However, until now, only one Amabie picture was found. One theory says that Amabie may have been created by mistake when someone copied an image of another yokai.

Yet, more than 100 years later, Amabie has become a big star. Amabie stands for staving off the disease and overcoming the pandemic. 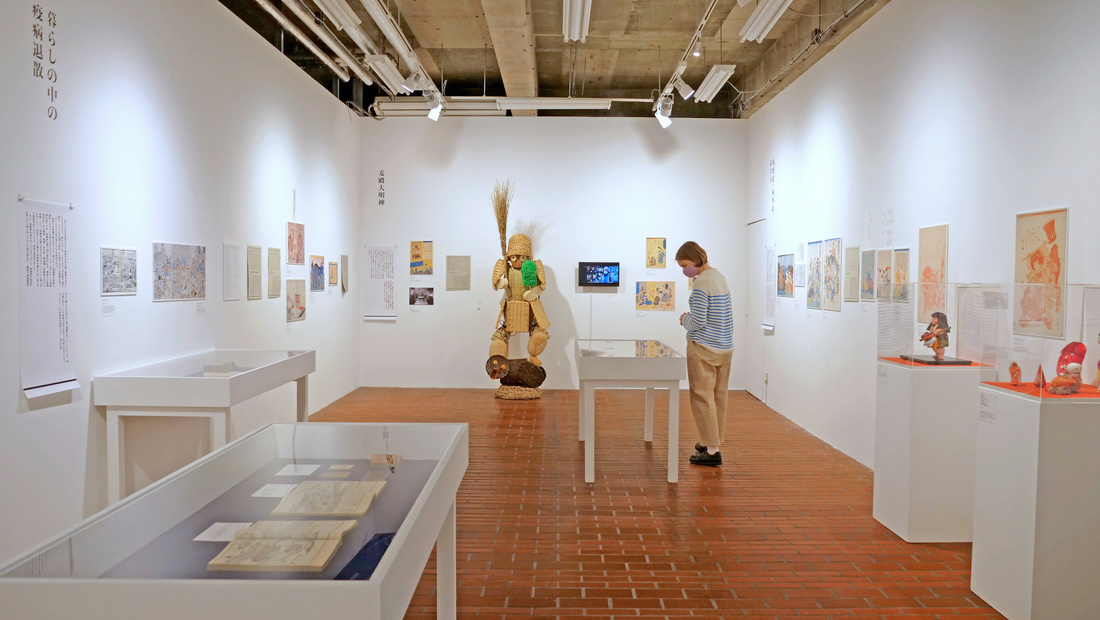 During the Edo period, there was no effective treatment for a lot of diseases. Therefore, people visited temples and shrines to wish for health. For example, there was a temple with a wooden statue of a god. People believed that when a child passed through the legs of the statue, the child wouldn’t get measles – or a least only a mild case. 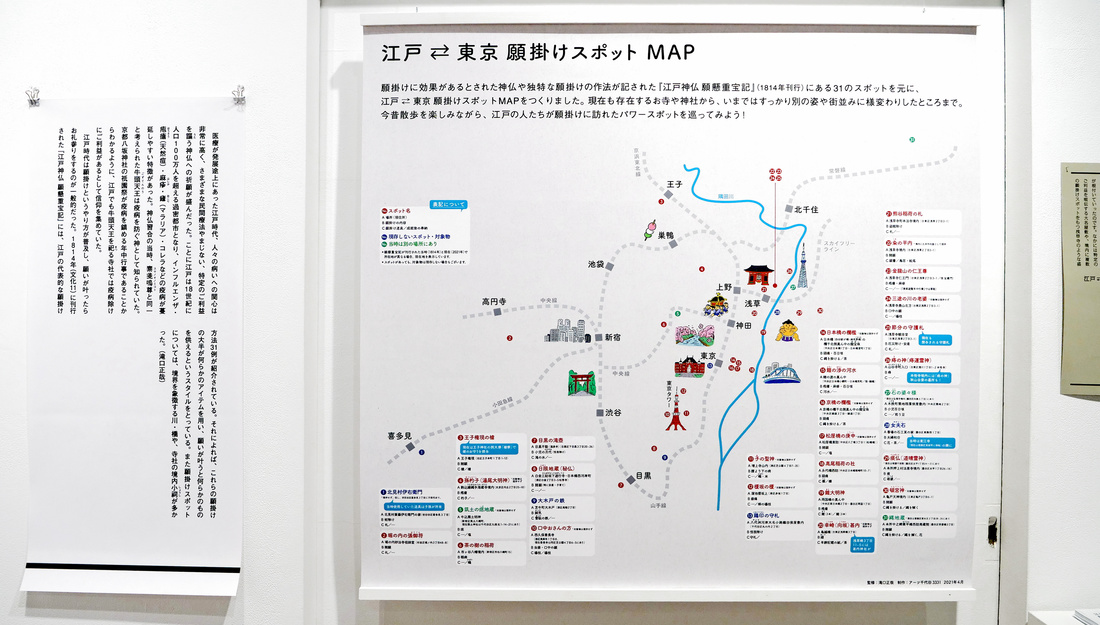 The spots where you could wish for these very specific things were located in quite “creative” places, such as on top of a sloped path or in the middle of a bridge. There are still some places left in Tokyo. If you want to visit these historic power spots, don’t forget to take one of the free maps distributed at the venue. 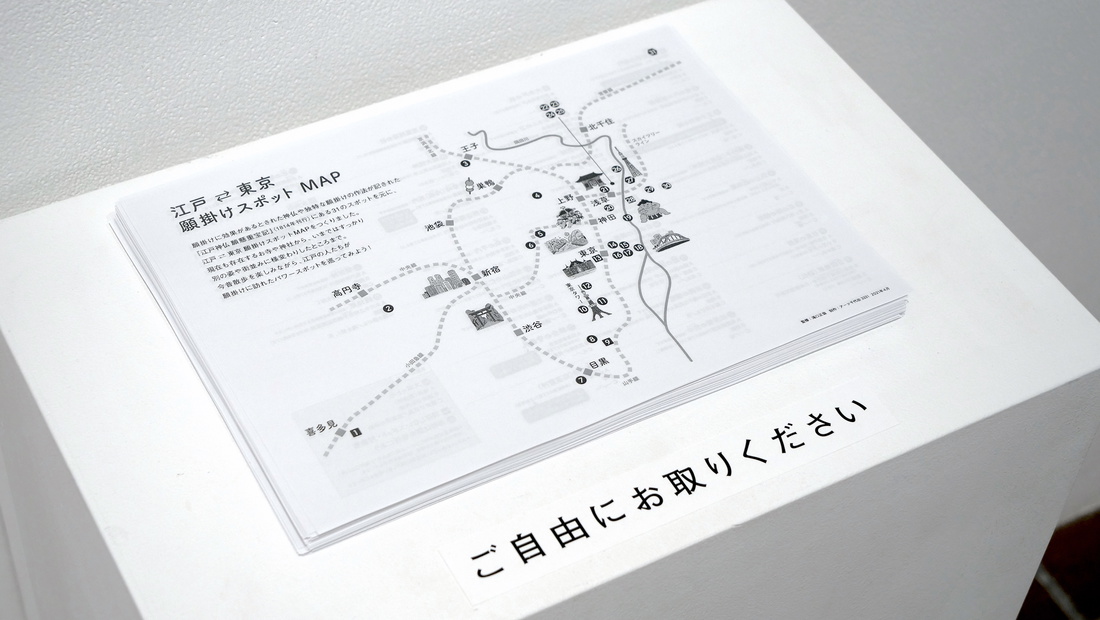 Coping with plagues and diseases in daily life

In addition to power spots, there were many items in daily life for coping with epidemics during the Edo period.

One of the highlights of this exhibition is the huge basket work called ‘Mugidono Daimyojin’ specially created for this exhibition by 3331 and Naoyuki Kinoshita, who supervised the exhibition.

In Japanese, the awn (the bristly part) of wheat is called “hashika” which has the same pronunciation as measles in Japanese (also hashika). Since wheat or barley already have “hashika” attached to them, people saw wheat as a symbol of having overcome a measles infection. Now in times of COVID-19, Naoyuki Kinoshita is using woven baskets to create a modern version of ‘Mugidono Daimyojin’, connecting the wishes for the extinction of the epidemic from the past to the present. 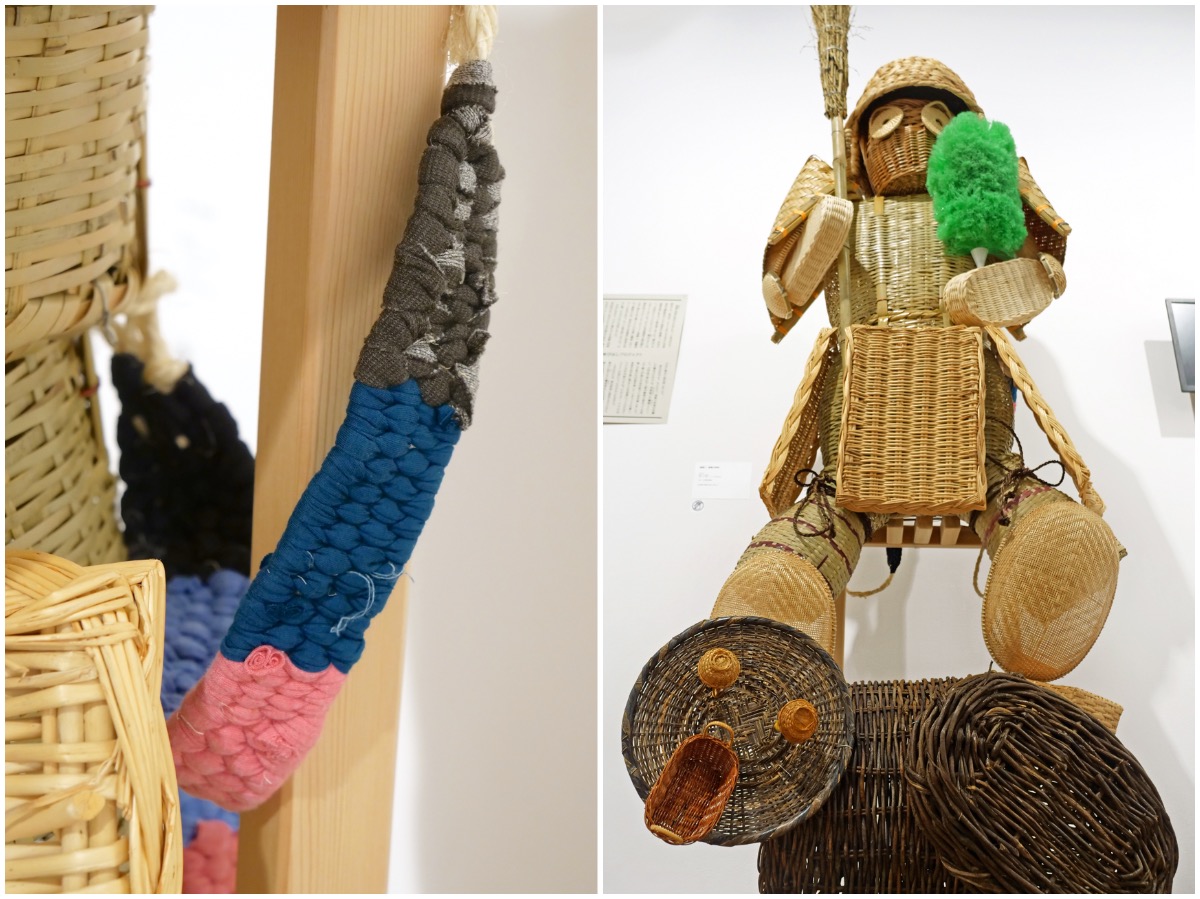 The exhibition allowed me to learn about the sincere beliefs of the people of Edo whishing for the extinction of plagues and illnesses. Also, some of their creative ways of coping in daily life made me giggle.
It seems that we still need some time to deal with and overcome the current pandemic, but this cute exhibition definitely made me feel a lot better and more positive! If you have the chance, please visit the exhibition – admission is free! 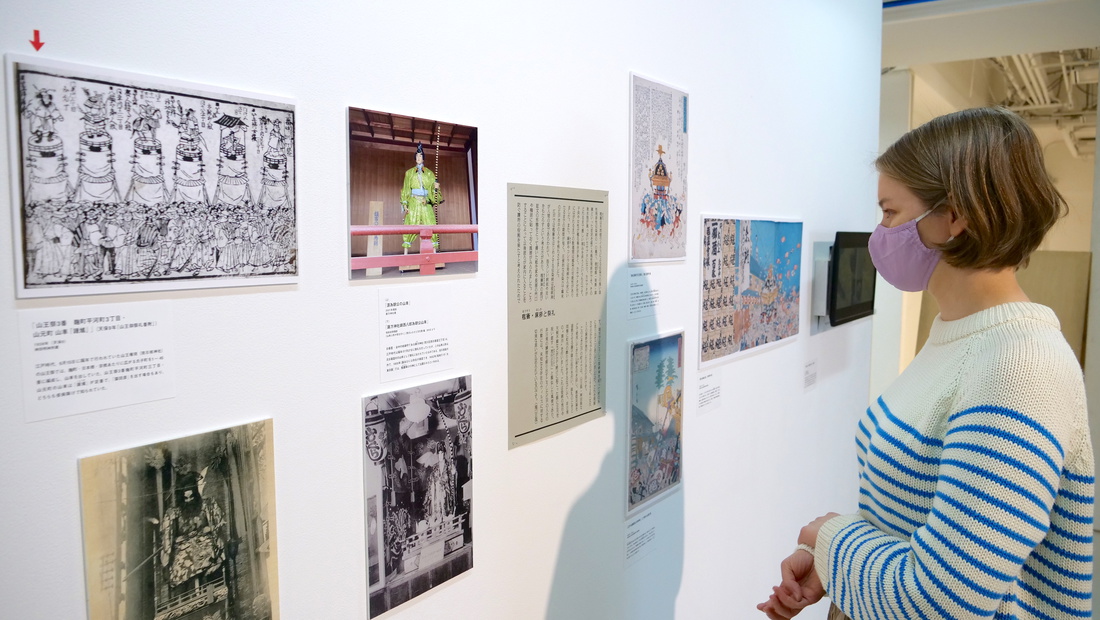 3331 Arts Chiyoda Special Exhibition: “Ekibyo, Taisan! How did the people of Edo deal with illness?” 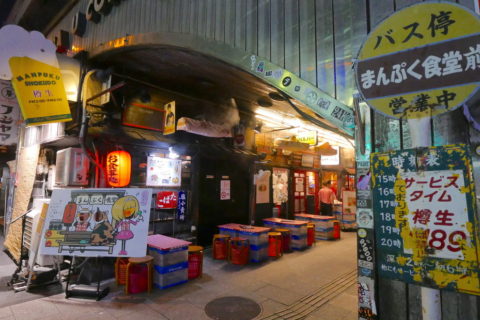 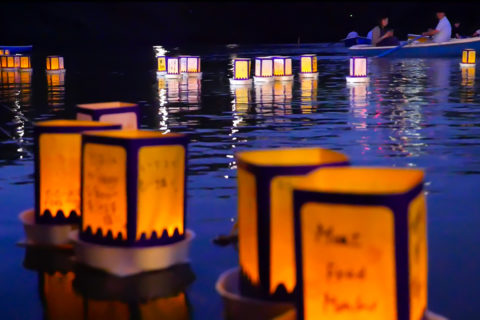 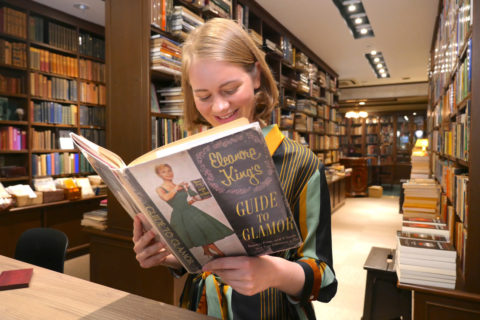 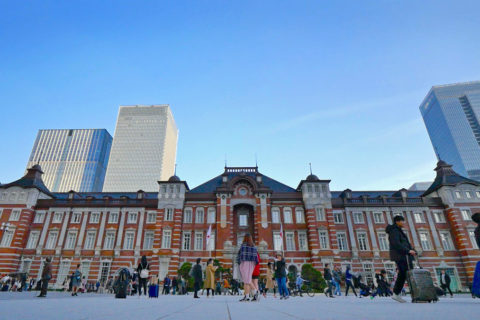 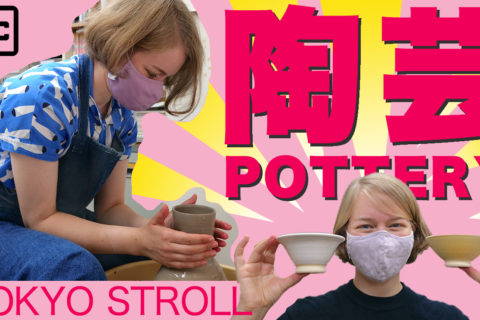 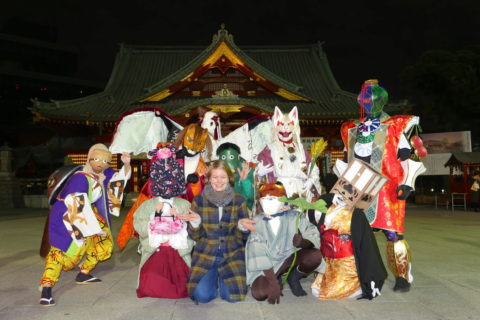 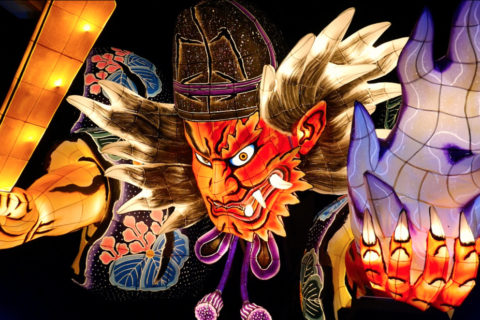